If you’re an avid follower of entrepreneurs and those raising the profile of careers in STEM (science, technology, engineering, and math), you will no doubt have heard of Alexia Hilbertidou.
​
This purpose driven, 18 year old woman is the CEO of GirlBoss New Zealand, (GirlBoss New Zealand encourages young women to dream big and consider fields in which they are under-represented such as STEM, business and governance - areas in which they can create large scale change which benefits us all).  She started this company two years earlier aged 16! Her passion for this has led her to some amazing places - she went on a trip to NASA to talk about making science more accessible to the public, and is incredibly driven to create more awareness and have more conversations where young women are inspired to think big, take STEM related classes and build leadership skills. All her efforts are appreciated and noted – she was awarded the 2018 Queen's Young Leaders award!

Alexia’s definition of success has always been socially driven, and she is confident that through her work with GirlBoss New Zealand, she’s found her purpose and is making a difference.  Her tip is to not try so hard to select a certain career path, but focus on what your purpose is and any issues you want want to solve, and then look at what kind of jobs you can do in that area.

At the age of 16, Alexia founded GirlBoss New Zealand, with a big focus on encouraging young women into fields were women are under-represented yet would add so much value to. Tech and science skills are becoming increasingly important and yet women are often not selecting to develop these skills early on. Business in general is another area that lacks gender diversity (and other diversity, but we’re not on that soapbox atm), with only 2% of New Zealand's NZX50 CEOs being female. You can see why we fully endorse what GirlBoss New Zealand is all about!
Knowing this, Alexia made it her mission to organise and host events, where inspirational female role models can speak to girls from across the country. She developed workshops on leadership skills and seeks ways to aid young talent to build their capability and networks, all aligned with GirlBoss’ mission to “develop 21st-century skills to equip young women for the rapidly changing workplace”.

Alexia’s focus is to take as many opportunities as possible to
​“encourage more young women to push themselves, to take more challenging paths and to really think outside of their comfort zone. And to not restrict themselves at a young age by limiting their career options.”

Back to Alexia’s journey though. High School flew by and before Alexia knew it, many of her friends were applying for places at Universities across the country. This time was described as one of her biggest challenges, as she always thought that University was the next step.  After careful reflection and a lot of consideration, she kept coming back to her purpose, and seeing the great opportunities and impact she could have with GirlBoss New Zealand. So, she made the decision not to go to university, as working on her business and following her passion, felt right. 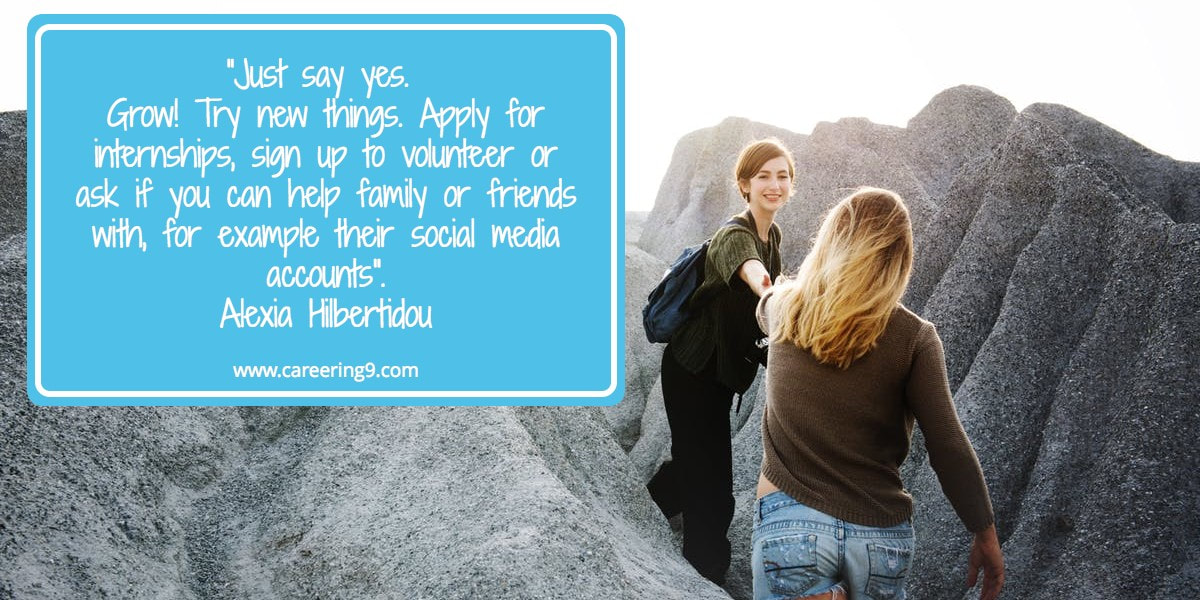 Some of the compelling statistics that weighed on her mind include …

Alexia, through GirlBoss New Zealand, is on a mission to help change these.
She uses four ways to do so: Inform, Inspire, Teach and Connect, and the GirlBoss New Zealand community is rapidly growing. Go check out what it’s all about and spread the word!

Another area of shared interest and passion between us here at Careering and GirlBoss New Zealand, is increasing financial confidence and capability for women. Alexia says “We need to make sure that women are confident to have the hard conversations, and also have the confidence to talk about money.”
​
She reminds us that whenever a pay negotiation is coming up, be prepared - make sure to research what people doing a similar role are paid externally, and in the company, find the standard rate and ask for it. Another bold step to take is early on in the interview process, you can ask your potential employer “Are men and women getting paid the same here?”. It is a good way to enforce the value of equal pay and encourage businesses to think about whether there are options they can take to level the playing field.
Looking into the future, Alexia has her finger on the pulse as to the rapidly changing work space – she reminds us all that 47% of jobs will be lost or changed in the next 20 years and women are going to be strongly affected by this, considering that jobs such as administration and retail, which are largely filled by women, are predominantly affected. The biggest growth has been and will continue to be in STEM related areas and entrepreneurship, which to date, women are under-represented in.

Furthermore, Alexia paraphrased from the Economic Forum Report that unless we take strong action to encourage women into those fields, we can expect mass unemployment for women. That’s on top of the concerning stat that social gender equity and economic parity for women has been decreasing since 2013. Meaning, that we are actually going backwards in terms of women rights!

​Take a few minutes and think about this. Scary. And frustrating!

"It is up to all of us to change it,  and change can happen when we align our efforts to really shift the dial".

Summer 2017/2018
Watch this space! There's a tonne of content being moulded for you which will make it's way here in the coming months so be sure to flick us a LIKE on Facebook to keep up with the latest and greatest.