​Ladies! Meet Abbe Hyde, who has been a full-time entrepreneur for the last three years. For most of the 3 years Abby has worked on a start-up called ‘Such Crowd’. ‘Such Crowd’ got funding after working in collaboration with lighting lab, the collab resulted in making money by having finished products and winning clients. But she doesn't stop there: Abbe got nominated for a woman of influence award and received a scholarship for her masters. In the end...

But Abbe certainly never dreamed or aspired to be an entrepreneur at a younger age. Back in her teenage years, Abbe actually wanted to become a movie star. It wasn’t until she turned 15 that she came to realise that dream was long gone (although I did tell her that it could still happen!). The idea of working in the entrepreneurial space did not come about in a second. At the end of high school, Abbe conducted a young enterprise program and decided to stick with business, rather than teaching, when she moved on to university. In the last year of her Bachelor degree, Abbe was so fortunate to do an exchange to Minnesota in the US and took an entrepreneurship paper while she was over there. Interestingly, part of that paper was doing 60-sec pitch, and Abbe was the lucky receiver of USD 1500 for hers, how great is that? 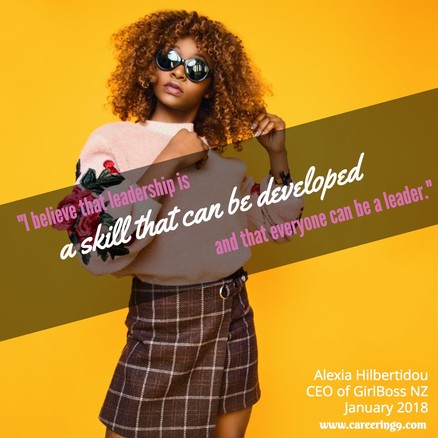 After finishing her Masters in Entrepreneurship, the biggest prompt to beginning her own venture was that there were simply no jobs available. She was always keen to do her own thing, but it took the right people and the right time. The biggest fear she faced to starting her own business was public failure, and at first Abbe didn't feel comfortable telling anyone what she was actually doing. She soon realised that there is never a right time to tell someone about these things, it was just something that had to be done, especially because the further along you get in your journey, the bigger the potential fall gets. Luckily, time allowed Abbe to get over that fear – good on her!

Anyone else out there who has worked on their own project will have experienced firsthand the numerous approaches of people wanting to give advice, Abbe was no different. At first Abbe was thinking something along the lines of: "Oh my god, you must know so much. Look at you, working at Deloitte or the CEO of BNZ, I should totally listen to you." But as it turns out, the start-up scene changes so fast that 20 years old knowledge is not relevant anymore. Once you realise that, you will probably change your thinking towards: "I only listen to people who have actually done a start-up [recently] or are doing one right now." Also, here is another thought that might change your perception on this: "At the end of the day, it is yours [business] and you are the one who needs to be making the key decisions." If you don't feel comfortable with a particular decision and have done all your due diligence to make an informed decision, "follow your gut. Intention is your best friend!"
Another thing that is really crucial in today’s world is design skills! Who would have known? "It is so important to be able to get what is in your head out in some form that people can view, and if you can quickly make something look pretty, the sales work so much more." In Abbe's personal situation, "it would have helped a lot with communicating what we were and how to use our platform to have design skills on our team.” So, what if you don’t feel comfortable with design or it is a weakness of yours? Another skill that can be very useful here is outsourcing! It “is a really great skill to have and if you are good at outsourcing stuff, that can take troubles aware from you.”

Abbe had some great things to share with us and would like to recommend the following things to you:
Interviewee: Abbe Hyde, New Zealand.
​
Role: Founder of

Summer 2018/2019
Watch this space! There's a tonne of content being moulded for you which will make it's way here in the coming months so be sure to flick us a LIKE on Facebook to keep up with the latest and greatest.